To go paperless, or to not go paperless; that is the question. In late fall 2014, the City of Rancho Cordova decided to transition from a quarterly print newsletter to a monthly e-newsletter.

The print newsletter called City Views was mailed to every business and resident in the City limits (over 40,000 locations). City Views cost around $85,000 per year, there was a limitation on space, there was limited response from citizens for calls to action, and there was no way to contact every citizen if there was an unexpected change to what was promoted. Case in point, one of the largest annual events was moved to a new date due to weather, and many citizens showed up not knowing there had been a change. 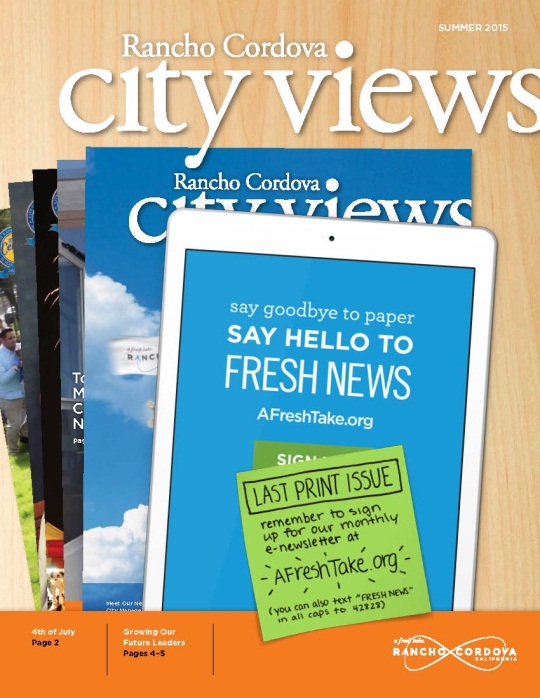 A monthly e-newsletter concept powered by Constant Contact would provide more news, more frequently, and it would cost around $800 per year. The transition would save monetary resources, promote efficiency, and allow citizens to stay educated on what was happening. The City decided to call the monthly e-newsletter “Fresh News” and any e-newsletter alerts in between as “Fresh Alert.”

Rancho Cordova’s citizens are a mix of demographics in age, ethnicity, and income, and each requires different communication methods. The City’s Communications Department understood that they needed to announce the change as early as possible to ensure citizens transitioned to the new e-newsletter – especially those who weren’t fully comfortable with technology. In January 2015, the Department began speaking to internal staff and City Council about the proposed change. Starting in February 2015, it ran a campaign about the transition to Fresh News by including articles in the print newsletter City Views, announcements from the Mayor at speaking engagements and town hall meetings, updates on the City website and social media pages, news releases in the local paper, and so forth. Around 25 citizens called the City with the request to still receive print out copies of the e-newsletter, which the City gladly accommodated.

Fresh News debuted on July 1st, 2015 when the City turned 12 years old! To-date, over 1,400 people have signed up for the e-newsletter and the open rates are at a staggering 46 – 53%, over the Industry Average of 32.5%, according to Constant Contact. Click here to read the latest edition of Fresh News. 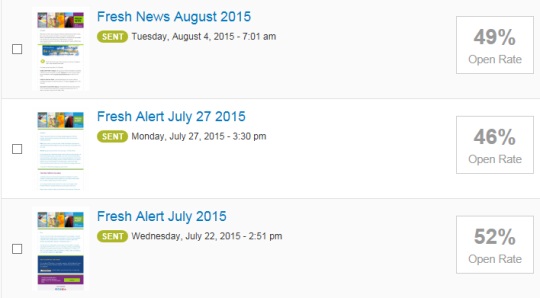 Citizens contacted the City with thanks:

“Thank you VERY, very, much. I have printed this notification and saved it in my phone number list file, and in my computer. This kind of information is so helpful; I hope you could reach a lot of people. Good job.” – Jill, about an alert on how to report after-hours emergencies.

“This was a very nice email to receive this morning; a nice way to start the day. Makes me proud to me a 25 year old local business and homeowner here. Many thanks and many more happy birthdays to the City of Rancho Cordova! Nice job!” - Katherine Weedman-Cox, about the first edition of Fresh News.

“Hi! Thanks for the e-newsletter! I have been looking forward to this first issue since it was announced in the print version a few months ago. Happy Birthday Rancho Cordova! ...and Happy 4th of July!” - David Gieselman, about the first edition of Fresh News.

Despite the positive comments and growing e-list, there was still concern from leadership about reaching Rancho Cordova citizens who don’t have an email address (primarily the senior community and disadvantaged groups) and losing readership. Unfortunately with print, there is not an easy and valid method to measure “Open Rates” or “Clicks.” As such, the City’s Communications Department decided to balance out print versus electronic by providing a print progress report mailed to all citizens and businesses two times a year. The report would summarize capital improvement projects, budget numbers, new businesses or projects, and ask for email addresses at a cost of approximately $46,000 per year. The Department is now examining ways to ensure the process is efficient, accurate, and has the most return on investment.

In the growing debate on print versus electronic, Rancho Cordova will continue to use both to ensure the needs of its citizens continue to be met.